The Christmas Bag Pack at Super Value, Morgan St, Waterford was our fourth annual one and this we raised €12,764. Sincere thanks to all the generous volunteers and customers.

The annual table quiz took place at The Showboat, Waterford. We had a most enjoyable and successful night and raised a total of €802.

Posted on 8th November 2007 by marfans

A bucket collection was held at Superquinn Supermarket, Kilbarry, Waterford and raised €208.

Posted on 4th November 2007 by marfans

Posted on 1st October 2007 by marfans

Posted on 9th September 2007 by marfans

Thanks to all those who donated so generously and sponsored Bridget McGrath on the fun run, which amounted to €1,050. Bridget is a loyal fundraiser who fundraises constantly throughout the year on our behalf.

The Pony and Trap Drive was an enormous success. Dressed in peasant style clothing as seen on The Irish R.M. television series, the fleet of five travelled from The Thatch Pub, Grannagh to Jack Meades. The participants and spectators managed to dodge the showers on the day and people turned out along the route to view the spectacular scene and support the drive. The most enjoyable and successful day finished off with a traditional Irish music session at The Thatch Pub, Grannagh.

The total amount raised on the Pony and Trap Drive was €7,200.

Sincere thanks to the drivers, collectors, supporters and Mary Corcoran who raised a substantial amount of the total money collected in sponsorship. 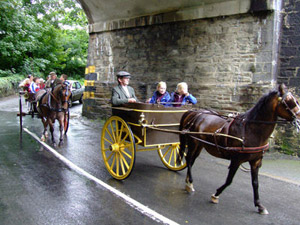 Michael and Geraldine McGrath, Kim Mulhearne and her friends from Kilmacthomas, County Waterford participated on behalf of our Charity. Total amount raised was €1,302. Sincere thanks to Kim and her friends who raised €859 of the total amount.

Sr Philomena Purcell secured sponsorship for this great Charity Walk on behalf of our Charity. Congratulations Philomena and we express our grateful thanks to all her generous sponsors. Sr Philomena raised a total of €1,044.

completed the cycle challenge again this year on behalf of our Charity. Mick and Maxine Creed are staunch supporters of The Marfans Research Foundation. We are grateful for their loyal support. Mick raised the grand total of €479.30