On August 6th 2005, a Pony and Trap Drive by skilled horsemen took place and was an enormous success despite the wet day and succeeded in raising €7200

The atmosphere was wonderful and everybody enjoyed themselves. The day started at 9.00a.m when the collectors started their bucket collections at all the shops and shopping centres in Carrick-on-Suir and Clonmel. Collectors also collected in all the villages in which the ponies and traps passed through. The Pony and Trap drivers were busy preparing their ponies and traps for the long drive. 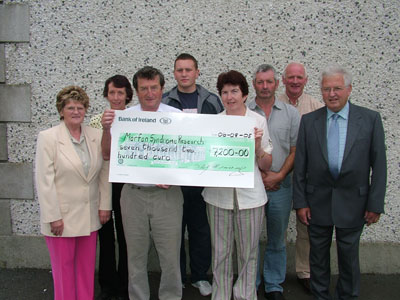 Mary Corcoran, Ballinerla, Kilmacow dressed up as an old woman and accompanied Billy Meany in his trap to Clonmel. The day finished with a most enjoyable cabaret at The Fox’s Den. DVD’s and Videos which capture the fun and atmosphere of the day are available at €15 each. To order a copy please phone Geraldine at 087 7747710.

Sincere thanks to all Marfan Syndrome Research supporters who helped in any way including collectors, sponsors and contributors.