Beard Shave and Waxing at The Thatch Pub, Grannagh, Kilmacow on 13th March 2009

Jennifer Kearns, Paul Kelly, Michael Tobin and Edmond Purcell organised this fun filled and successful event. The entertainment was brilliant from start to finish. Michael Tobin, Edmond Purcell and Eddie Dan had their beards shaved. Nicky Doyle, Edmond Purcell and Padraig Butler had their legs waxed – oh the pain!!! There were plenty willing volunteers to do the waxing. Paul Kelly had his underarms waxed. Paul was stoic with his high pain threshold. David Ryan, proprietor of The Thatch Pub volunteered to have his chest waxed if he got sufficient sponsorship. This brave deed raised €120.00 alone. The brilliant music was provided by Cathy Purcell and her band Shikaka. The patrons of the Thatch were enthralled with this magnificent girl band. The No 1 M.C. on the night was Pilot Conway who entertained us all in his own inimitable way. Pilot sang a few songs as also did local man Eamonn Hayes. Great credit is due to Michael, Jennifer, Paul and Edmond who organised the whole event. The amount raised was an incredible €1494. 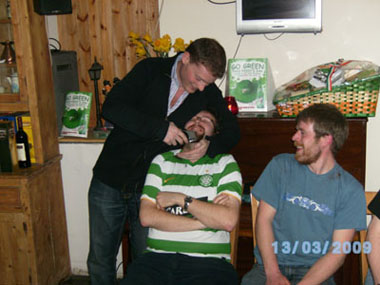 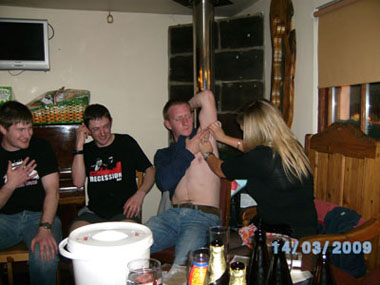